What is Giardia? Signs and Treatment for Dogs Giardia, or Giardiasis, is an infection in the intestines caused by a microscopic parasite. The single-celled parasite, also referred to as Giardia duodenalis or Giardia lamblia or Giardian intestinalis, travels through the intestines, latches itself to an intestinal wall, and feeds from its host. There are various types of Giardia, two of which are most prevalent in dogs.

Giardia infection has two life cycle stages: trophozoite and cyst. Trophozoites are the mobile form of Giardia that pass through and stick to the dog’s small intestine, feeding there. Giardia reproduce by dividing, and some trophozoites transform into cysts. When the dog excretes its feces, the cysts then pass on and can survive in most environments for an extended period of time. If another animal comes into contact with the contaminated surface, they can become infected – and the cycle repeats.

Which dogs are at risk for Giardia?

Giardia infection affects dogs of all ages, breeds, and sizes. However, its symptoms are more severe in younger puppies or senior dogs that have weakened immune systems.

Dogs are more prone to catching and transmitting Giardia if they frequent populated areas. Those that are raised in kennels or pet shops are also more likely to become infected, as they have more opportunities to come in contact with contaminated food, water, or poop.

How do dogs get Giardia?

Dogs get Giardia by ingesting cysts from a contaminated surface. Giardia parasites are resilient as they can live in most environments anywhere from a few weeks to a few months depending on the climate. Dogs can catch Giardia from simple daily activities like drinking water that is contaminated with contagious Giardia cysts, touching poop with their nose or consuming feces, playing with shared toys, or grooming their fur.

Giardia is a zoonotic disease, which means that it is contagious to both humans and animals. It can potentially spread to all members of the family if owners are not careful. Giardia parasites also spread more easily if houses or general spaces do not practice proper hygiene, such as routine hand washing.

If a person or animal swallows a Giardia parasite, they will become infected and can easily spread the disease.

What are the symptoms of Giardia in dogs?

Often, dogs do not exhibit symptoms and remain asymptomatic for the duration of their infection. However, the most common, noticeable symptom is a soft, frothy, greasy, malodorous diarrhea that is voluminous – a.k.a. a lot of diarrhea.

Other clinical signs can include:

If diarrhea or any other clinical symptom goes untreated, conditions can worsen and require a higher level of medical care. Giardia can also weaken a dog’s immune system in the long-term, leading to other health concerns. In rare cases, it becomes fatal and leads to death.

How is Giardia in dogs diagnosed?

During a fecal flotation test, they take stool samples – which can be collected by the owner at home or during the vet visit – and mix it with a solution or spin it in a centrifuge. After a few minutes, the solution or spinning draws out parasitic cysts or eggs, which the veterinarian can then analyze under a microscope.

Another test that veterinarians commonly use to diagnose Giardia is a SNAP test. The SNAP test is an immunoassay that identifies Giardia antigen in the stool. Regardless of the stage of the infection’s life cycle, the SNAP test helps veterinarians quickly detect the presence of Giardia within the dog’s system so that treatment can promptly begin.

How is Giardia in dogs treated?

Fortunately, Giardia is generally curable with proper medication and diligent sanitation practices. Dog parents must make sure to clean home surfaces with an effective disinfectant or bleach and replace water bowls on a daily basis, as the Giardia parasite can easily survive in both environments. It’s also a good idea to wash the dog with shampoo as instructed to remove any potential cysts in their fur.

Every dog’s Giardia is different and may need varying types of treatment. However, veterinarians often prescribe oral medication such as Fenbendazole, typically used for treating worms, or Metronidazole, an antibiotic. Occasionally, these medications are combined with others to enhance effectiveness. These medications are administered for a few days to ensure that the Giardia cysts do not survive treatment. Afterwards, it is highly recommended for dog parents to make follow-up appointments and monitor for possible reinfection.

How much does it cost to treat Giardia in dogs?

Diagnosis and treatment of an uncomplicated case of Giardia is usually around $100. If Giardia is left untreated, however, and worsens, or if your dog is continually reinfected from the environment, costs can easily hike up to a few hundred dollars. For this reason, if you suspect your dog has Giardia, you’ll want to get to the vet as soon as possible.

What is the prognosis of Giardia in dogs? Is it curable?

The good news is that most dogs will recover from Giardia with little to no complications. It’s a curable disease that requires regular medical treatment, home sanitation, and careful quarantining of your dog. In some cases, dogs with compromised immune systems may continue to exhibit both short-term and long-term symptoms.

How can you help prevent your dog from getting Giardia?

Once your pup is finished with their medical treatment, make a follow-up appointment with your vet. It’s always better to be safe than sorry, and one preventative visit can make a world of a difference.

You can also help prevent future Giardia infections by maintaining a clean source of drinking water for your dog and keeping your home clean. Don’t allow your dog to drink from outside areas, such as ponds, puddles, dog parks, or any other public water sources. Keep them away from fecal matter, practice proper hygiene inside and outside of the house, and you can better ensure your pup steers clear of this disease.

There is a commercial Giardia vaccine available, however, it is not effective and is generally not recommended by veterinarians.

If you suspect that your pup has Giardia, pet insurance can help you say ‘yes’ to the best care, even when it’s costly. Check out how Pumpkin insurance plans can help cover the cost of treating Giardia infections and much more.

Looking for more resources or advice?

Check out the following sites for more information about Giardia: 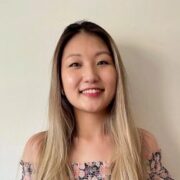 Shi-won is a copywriter and an enthusiastic dog aunt to Maltese and Shih Tzu puppies.
Reviewed by Dr. Sarah Wooten, DVM