What is Giardia in Cats? Symptoms and Treatment Giardia infection, or Giardiasis, is a disease caused by a tiny protozoan parasite that lives in mammal intestines and passes through feces. Outside of the body, Giardia parasites can live for weeks or even months. Giardiasis can also spread to other animals and humans easily, as the parasites are microscopic-sized and contagious to many animals. While this may sound scary, Giardiasis is rarely life-threatening, can be easily treated with antibiotics, and cats tend to recover from it within a few days once given medication.

You might be wondering, “What exactly does Giardia do inside of a cat’s body?” First, parasites make themselves at home in a cat’s intestines, feeding off of the intestinal wall and causing diarrhea. In the intestine, trophozoites then reproduce as Giardia cysts, and once those cysts harden, they pass out of animals through feces. Cysts can live on for weeks outside of their hosts, contaminating water, food, and other environments. Once a cat ingests a Giardia cyst, that cyst transforms into a trophozoite in the cat’s small intestine and then latches on to the intestinal wall to feed again. This cycle continues until the Giardiasis is treated and eradicated from a cat’s environment.

Which cats are at risk for Giardia?

Giardia infection affects many types of mammals, including cats, dogs, and humans. Younger kittens, older cats, and immunocompromised adult cats, are most at risk for Giardia infection. Population is also a factor in infection rates, as Giardia has a higher prevalence in densely populated areas. Stray cats often have Giardiasis, and it’s more common for a cat that is raised in a kennel to become infected with parasites. This is because populated areas give a cat more access to contaminated food, drinking water, and fecal matter.

Although rare, humans are also at risk of contracting Giardia germs from their pets. Cat stools can contain Giardia germs, and those germs can make people sick with similar symptoms.

How do cats get Giardia?

If a person or animal swallows a Giardia parasite, they can become infected and can easily spread the disease. After ingestion, cats with Giardiasis can be infected for weeks or more, and parasites can continue to live outside of their bodies. Cats with Giardia should be quarantined away from other animals to prevent spread of illness.

What are the symptoms of Giardia in cats?

While many cats are asymptomatic for the duration of their infection, the most common symptom is a chronic, large volume, foul-smelling, and watery diarrhea.

Other clinical signs can include:

Giardia can also weaken a cat’s immune system in the long-term, leading to other health concerns. In rare cases, it can be fatal.

How is Giardia in cats diagnosed?

After a discussion with your veterinarian about your cat’s symptoms and exposure, Giardia can be detected through microscopic examination of the cat’s stool. If Giardia is suspected, your veterinarian will likely ask for a fecal sample to run tests for Giardia.

How is Giardia in cats treated?

Veterinarians often prescribe medications such as Fenbendazole, typically used for treating worms, or Metronidazole, an antibiotic. This is an off-label use of drugs. Treatment will continue until stool samples from your cat show no signs of Giardia parasites. The CDC also recommends thoroughly cleaning and disinfecting your house, during and after your cat’s infection, to prevent reinfection or further spread of the disease. It is also recommended to isolate your cat from other animals in the house until they are asymptomatic or negative for Giardia – your veterinarian will advise you on this.

How much does it cost to treat Giardia in cats?

Diagnosis and basic treatment of Giardia costs $75-$100. However, if Giardia is left untreated and worsens, costs can easily hike up to a few hundred dollars. For this reason, if you suspect your cat has Giardia, you’ll want to get to the vet as soon as possible. Even if your cat doesn’t have Giardia, they might have other stomach issues that your veterinarian can help resolve.

What is the prognosis of Giardia in cats? Is it curable?

The good news is that giardiasis is a curable disease that most cats recover from fairly quickly. Recovery is typically only prolonged if cats do not receive proper medical treatment for the disease or if they continually get reinfected from their environment, and recovery is most effective when pet owners properly bathe and quarantine their pets.

How can you help prevent your cat from getting Giardia?

Proper sanitation is the best way to prevent your cat from coming in contact with Giardia parasites. This means regularly picking up poop, along with cleaning surfaces that your cat comes into contact with, especially litter boxes. Anywhere that you can find poop, you can find Giardia.

If your cat has a dog sibling, or another mammalian pet friend, make sure to regularly bathe them, and don’t let their stools sit out for your cat to find. Also, if possible, avoid keeping your pets in kennels. A dirty crate shared by a lot of pets is a breeding ground for parasites.

There is a commercial Giardia vaccine available, however, it is not effective and is generally not recommended by veterinarians.

Check out how Pumpkin’s cat insurance plans can help cover the cost of Giardia treatment and much more.

Looking for more resources or advice?

Check out the following sites for more information about Giardia: 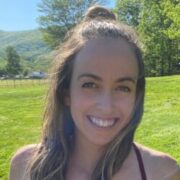 Rachel is a copywriter and the favorite aunt of an adorable Cockapoo named Bentley.
Reviewed by Dr. Sarah Wooten, DVM