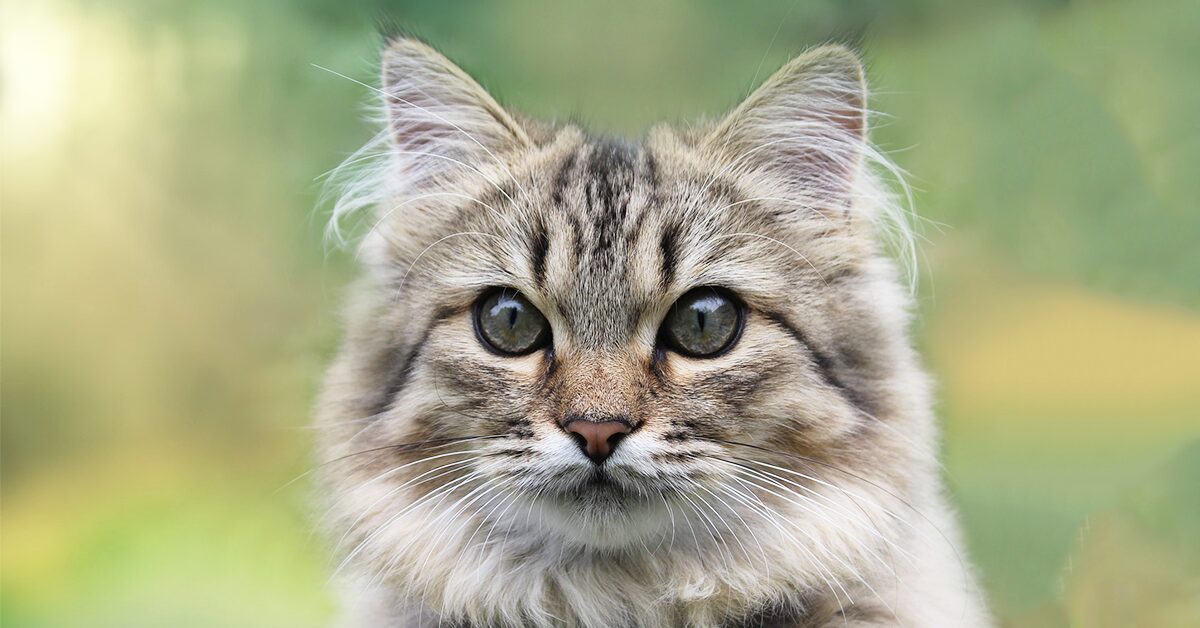 If you’re looking for a gentle, friendly fluffball who loves people and other pets, I’m the breed for you! We Norwegian Forest Cats (aka Wegies) are very sociable, but we’re also super chill. As much as I love lazy snuggles with my humans, I’m also playful and get the zoomies. I need my human to get me a good cat tree for climbing and lots of pawesome toys to occupy my curious mind – oh, did I mention I’m a smarty-pants

I am the purrfect kitty for a house with kids and other pets – I’m a sweetheart and I get along with everybody… well, maybe not mice, but I can’t help it! My ancestors were bred to hunt them. My longhaired double coat and bushy tail are absolutely furbulous, but I’m built for cold weather so pawlease keep me inside with the A/C blasting if you live somewhere hot. Beauty like mine does take work – I need frequent combing, especially during shedding seasons. I promise I’m worth the effort, though. If you show me love, you’ll get it back from me and then some!

Get the pet insurance all the Wegies are meowing about.

Wegies are legendary, but not for just our sweet personalities and good looks. According to Norse mythology, we were the chosen breed of Freya, goddess of love and fertility. Myths say that Thor gave two Wegie kitties to Freya as a gift. They grew up so big and strong they could pull Freya’s chariot! Her cats were more than just workers – they were companions, too. Just like me, Freya’s cats loved to play with her and take naps at her feet. They also loved to climb just like I do, but her cats could climb mountains – a cat tree is good enough for me!

As you can see, we Norwegian Forest Cats age pretty gracefully. Here are a few key milestones in my growth & development to be aware of as I grow up from a kitten to an adult and senior! I need a lot of grooming, so make sure to get me used to coat combing and teeth brushing when I’m little. It takes me a while to mature, but now that I’m all grown up, make sure to monitor my weight – I’m a big breed, but I don’t want to get too big. I’m almost 60 in human years, so teeth & gum issues may be on the way. Along with routine vet check-ups, pawlease brush my teeth regularly.

As you might expect, we Norwegian Forest Cats come from Norway (where we’re known as skogkatt, which means “forest cat” in Norwegian). We’re a very old breed – there are even tales of my earliest ancestors in Norse mythology! But not all humans agree on our origin. Some humans believe my earliest ancestors were a mix between domestic shorthair cats that the Vikings brought from England and longhaired cats brought by the Crusaders. Other humans think that we’re related to Siberians and Turkish Angoras.

The earliest Wegies were very helpful to their humans, the Vikings and Scandinavian farmers. Because we are super good mousers, we helped our humans get rid of pesky critters on their ships and in their barns and fields. Some humans believe that the first Norwegian Forest Cats came to North America as mousers on the Viking ships that landed in Newfoundland the 10th century, and that these Wegies were bred with domestic cats to create my cousin, the Maine Coon!

The first organization dedicated to us, the Norwegian Forest Cat Club, was formed in Oslo, Norway in 1938. These Wegie lovers wanted to preserve our breed, but during World War II we came close to becoming extinct because my ancestors were breeding with domestic cats. Almost no purebred Wegies were left but the nice humans of the Norwegian Forest Cat Club came to our rescue and started a breeding program to save us. We were so beloved that in the 1950s, King Olaf declared us the official cat of Norway!

We were always Norway’s top cat but we hit the scene in the rest of Europe when Carl-Fredrik Nordane took a fancy to us and got us registered with the Fédération Internationale Féline in the 1970s. We finally caught on in America and were recognized by the Cat Fanciers Association in 1994.

In addition to purebred Norwegian Forest Cats like me, there are tons of prrrfectly sweet mixed-breed Wegies that are looking to find their furever homes. You can learn where to find your next pet below! If you are buying a kitten from this breed, you should look for parents that have had their hips x-rayed at the vet. They should also have had yearly heart scans for the heart condition Hypertrophic Cardiomyopathy. Even if both of these tests have been done and are negative, it's no guarantee that the condition won't develop in your kitten, so you'll need to commit to regular checks, too. - Joanna Woodnutt, MRCVS

Norwegian forest cats are active cats that do not cope well in a small home. They will need plenty of mental and physical exercise. Like all cats, they can be kept as indoor-only, but you will need to invest in some cat exercise equipment, such as cat shelves or a cat exercise wheel, or they'll become bored and destructive. - Joanna Woodnutt, MRCVS

Norwegian Forest Cats require little grooming since the thick coat does not mat or tangle. Combing will remove loose hairs and aids in preventing hairballs. Be careful of over-shampooing, because it can remove too much of the oil in the coat which makes it water resistant. The nails are thick and strong and should be clipped at least every two weeks. - Gail Wolfe, DVM

While Norwegian Forest Cats are a generally healthy breed, cat-astrophes can happen to any cat at any age. If your kitty gets hurt or sick, pet insurance can help you say ‘yes’ to the best care, even when it’s costly. When it comes to shopping for this breed, you’ll want to choose an insurance plan like Pumpkin plan that covers hereditary conditions Wegies are prone to developing, and that can be costly to treat. While a reputable breeder will conduct genetic testing on your kitty’s parents to help minimize the chances of passing down hereditary conditions, they can’t always be avoided. Let’s look at some common ones, and how Pumpkin Cat Insurance plans could help cover the cost of care!

Wegies are genetically predisposed to heart problems, specifically Hypertrophic Cardiomyopathy (HCM). In this condition, the muscle walls of the heart thicken causing a decline in cardiac function. While there is no cure, heart disease can be managed with medication and dietary changes.

Common in large cat breeds, hip dysplasia occurs when the ball and socket of the hip joint doesn’t develop or work properly, causing joint deterioration, pain, lameness, and/or arthritis. While mild cases are treated with prescription meds and physical therapy, severe ones may require surgery.

Get the pet insurance all the Wegies are meowing about.