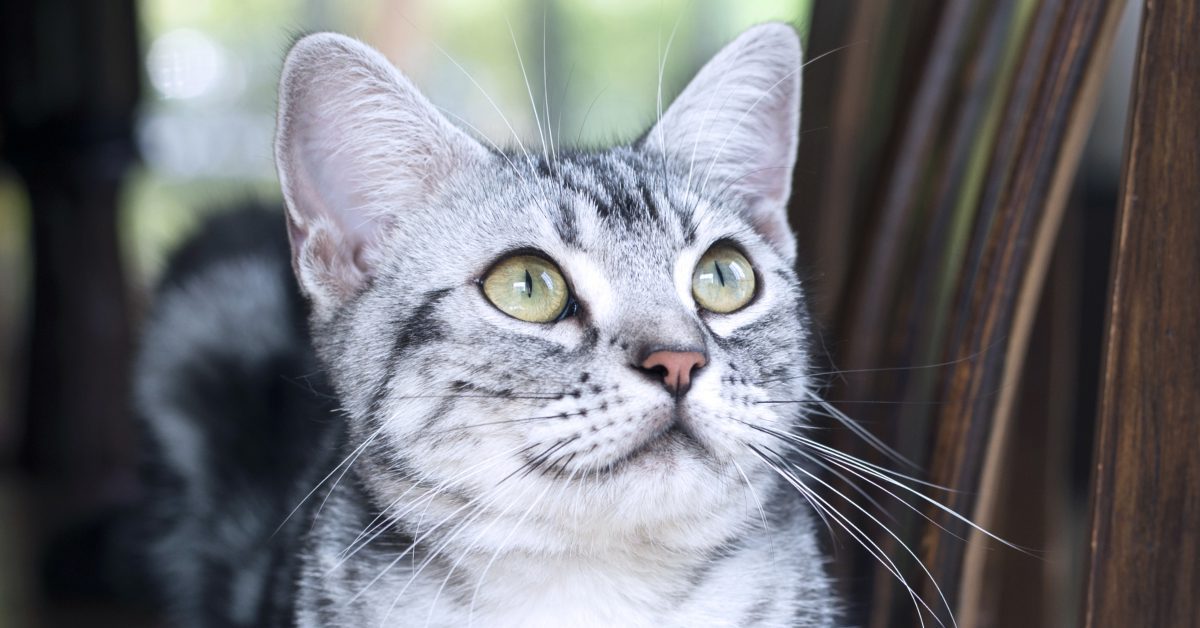 If you’re looking for an easygoing family cat who is just as happy chilling out as playing around, I’m the breed for you! We American Shorthairs are known for being very adaptable and independent, so if you can’t hang at home with me all the time, it’s all good. Just make sure I have some fun toys to occupy myself and a window where I can observe the world around me – my ancestors were working mouse hunters, so I really enjoy watching birds and squirrels outside (even if I can’t go after them!). When my humans are home, I love to play indoors so I can get the exercise I need (I’ll get chunky if you don’t watch my weight).

I’m very mellow, so I’m great with kids and other cat-friendly animals. I may not be affectionate all the time, but that doesn’t mean I don’t love my humans – sometimes I just like to do my own thing. But don’t worry, when I do want some snuggles, you’ll know it! In keeping with my super low-maintenance vibe, I don’t shed a ton or need a lot of grooming to keep myself looking furbulous – weekly brushings are enough for me. Because I’m such a good-natured sweetie, I’m a sweet choice for a first-time cat parent, which is just one of the many reasons I’m one of the most popular cat breeds!

Get the pet insurance all the American Shorthairs are meowing about.

As you can see, we American Shorthairs age pretty gracefully. Here are a few key milestones in my growth & development to be aware of as I grow up from a kitten to an adult and senior! Since my breed is prone to obesity, It’s impawtant I get proper nutrition, food portions, and daily exercise from the very start. I’m one of the healthiest breeds around. Help keep it that way by staying on top of my weight, dental care, and yearly vet check-ups! I’m not the most active breed, so as I age – pawlease make sure I get enough exercise and adjust my diet if needed to stay fit!

We American Shorthairs are older than the United States of America itself! My early ancestors were European working cats who were excellent hunters and took care of rodent problems on ships, keeping their humans free from the diseases that those animals could carry. We came to North America on the Mayflower and landed in Plymouth, MA in 1620 with the early colonists from Europe. Some humans think we may have even been on earlier ships with colonists who landed in Jamestown, VA in 1607, with the Spanish who landed in Florida, or even the Vikings who landed in Newfoundland! Once my ancestors reached the New World, they worked as mousers in Colonial America and were prized for their hardiness and hard work. As settlement of America expanded, we went along with our human pioneers – after all, there were always vermin for us to catch back then!

We were always popular in America, and in 1895 we were exhibited at America’s first major cat show at Madison Square Garden in New York City. Back then we were still called the Domestic Shorthair (and would be until the 1960s), but our popularity across the nation made us one of the first five breeds recognized by the Cat Fanciers’ Association in 1906. At around this time, Americans started to fancy more exotic imported cat breeds like Persians and Angoras, but the American Shorthair lovers were devoted to us and began a selective breeding program to keep us going strong. Still, American tastes caused some breeders in the late 1950s to crossbreed us with Persians.

When we were officially named the American Shorthair in 1965, the breed standard excluded these hybrids. That year, a silver tabby American Shorthair named Shawnee Trademark won CFA’s Best Cat, solidifying our place among the world’s top breeds. Today, we are the #6 most popular cat breed! In addition to yearly wellness exams, recommended vaccines for your cat’s lifestyle, routine blood, urine, and fecal screens, and appropriate parasite prevention, talk to your vet about getting a DNA test + other health screenings for hereditary conditions and breed-specific health issues. HCM, which is short for a heart disease called Hypertrophic Cardiomyopathy, has been confirmed as an autosomal dominant inherited trait in American Shorthair cats. While there isn’t a specific genetic test for this disease, it’s important to confirm that the parents of any American Shorthair kitten you are purchasing have been tested and shown to be free of the disease via imaging studies, such as an echocardiogram and radiographs.

While American Shorthair cats do not have any special dietary requirements when compared to other cats, they are at risk of developing obesity. Choose a high-quality cat food that is certified to be complete and balanced by AAFCO, and feed a combination of wet and dry food. Equally as important is to not overfeed American Shorthair cats because obesity can predispose them to a large number of chronic diseases. You can use the hand test to determine if your cat is at a healthy weight, or ask your vet what is a good weight for your cat.

Tips for a well-behaved American Shorthair.

American Shorthair cats are laid back, social, and intelligent cats that are easy to care for. However, be aware that they do like to play, and if they are bored or stressed, American Shorthairs can be destructive or develop stress-related health disorders, so make sure to have plenty of entertaining things for your cat to do. American Shorthairs enjoy moderate exercise, so provide lots of room for your cat to run in your home, along with vertical space for climbing, vertical and horizontal scratching surfaces, and daily playtime sessions. Understand that when a cat misbehaves, they are saying they need something from you, and work with a vet or certified behaviorist if you run into problems with your cat.

While American Shorthairs are a generally healthy breed, cat-astrophes can happen to any cat at any age. If your kitty gets hurt or sick, pet insurance can help you say ‘yes’ to the best care, even when it’s costly. When it comes to shopping for this breed, you’ll want to choose an insurance plan like Pumpkin plan that covers hereditary conditions American Shorthairs are prone to developing, and that can be costly to treat. While a reputable breeder will conduct genetic testing on your kitty’s parents to help minimize the chances of passing down hereditary conditions – they can’t always be avoided. Let’s look at some common ones, and how Pumpkin Cat Insurance plans could help cover the cost of care!

American Shorthairs are not the most active breed – putting them at a higher risk for obesity. Overweight cats are more likely to develop other health issues, like diabetes, arthritis, and heart disease. That said, obesity is easily treatable with dietary changes, meds, and increased exercise.

Like many cat breeds, American Shorthairs can develop heart disease, specifically Hypertrophic Cardiomyopathy (HCM). This condition causes the muscle walls of the heart to thicken, leading to a decline in cardiac function. While there’s no cure, HCM can be managed with meds and dietary changes.

Get the pet insurance all the American Shorthairs are meowing about.